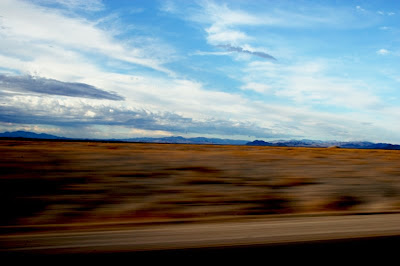 Death Valley Junction
On the border between California and Nevada


October 2006 - In Death Valley the earth spins a little faster; we swoon. It’s a strange feeling – vertigo at sea level. Nearby in the Amargosa Opera House the stage is going dark on an aging ballerina who moves like a marionette wired to the past - and we arrive weary pilgrims hoping to pay our respects to this icon and legend.
Earlier in the day it was a race against both the sun and certain extinction to find the hole in the southern Nevada desert where swims an endangered 20,000 year old fish; the Devil's Hole pupfish (Cyprinodon diabolis) fights for its life in this subterranean oasis.

Suddenly, clouds burst out of the Sierra Nevadas with no warning and roll off the mountains like giant smoke signals. The message that unfurls against that deep desert sky would prove to say: Not today.

Today both pupfish and ballerina are a no-show. The wild mustangs of Death Valley Junction don't come down to the river either, not today. The road to China Ranch is washed out -- vanished into a sea of sand. How I’ve longed to slake my thirst with their famous milkshakes made of dates; but not today.

Months have now turned into years but I've heard somewhere in the Nevada desert still waits an 84 year old ballerina, a 20,000 year old endangered fish and a beloved long lost cousin sipping on a date shake. I have not given up the hope of at last finding them – but not today.*


*It's rumored that Marta Becket, 84 year old ballerina and the last remaining resident of Death Valley Junction, will give her final performance sometime in the spring of 2009. Some two years later, I will return to this desert once again to attempt to see her - along with the pupfish, the mustangs and the delicious date shake - remembering of course that it's the journey and not the destination.
Posted by TR Ryan

Interesting photo & tale. A friend of mine was there during a flood years ago. He's an alien, though. Straight from the stars. It's the only thing that might explain everything...

The beautiful photo is matched with a wonderful narrative. Thanks.

Have a top weekend when you get there.

That is simply a beautiful shot!!! Interesting tale too!~My SWF is posted HERE. Have a great day!~

Great capture for SWF!!!! I am so happy to be part of this fun. I find myself excited visiting other sky photos all over the world. Happy weekend! Hope you can visit my SWF entry too...

Great photo... and I did enjoy the literature you included as well! Thank you.

The date shake sounds really kind of yummy...shame you got cancelled, but I hope it comes together for ya someday!

Beautiful picture.
Like a piece of art. A painting.
Wonderful! :)

What a wonderfully interesting post and a great photo. Thank you for sharing.

If you didn't travel so much you would be on the bestseller list. YOU can tell a story.

The desert is so moody...

These last two posts were . . . glorious!

(A wonderful word which you should have found a new appreciation of during your recent sojourn in China.)

I like especially, "Not Today" because it pays homage to the space in between the sights and events that all travelers experience - often without appreciating.

Wonderful words and pictures. I love Death Valley- haven't been there in years. It's one of Leon's favorite places anywhere. Be sure to check out Zabriskie Point on your next visit.

As always, TR, you fascinate me with your prose. Thanks for the Skywatch.~~Dee

I am completely entranced by this. It sounds like something from a fairytale or the kind of thing a Knight on a quest is sent to find. How wonderful!

Really enjoyed your story. I've seen that California Nevada border many times. Thanks for visiting my blog and telling the story about being chased by the Rhino. Glad you got away. Wow!

I just heard about that ballerina on at a writer's conference here in Tucson. She's written a memoir I believe. I met her publisher! If you get to see that performance I want to read about it here! Well written post and photos T.R. I enjoyed this.

Somehow this post reminds me of a Grateful Dead song, peopled with bizarre characters, ghosts even. You never know the beginning or the end--they just appear and then vanish. Love it, Timmo.