In Guad We Trust on the Eve of the Thirteenth Moon 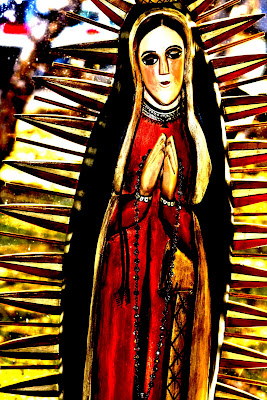 Santero Carving and Painting of the Virgin of Guadalupe
by Eulogio and Zoraida Ortega, Velarde, NM
photo taken on the occasion of the memorial mass for
Jose Montoya, beloved father of friends Daniel and Roger Montoya, December 6, 2008

This is a shout-out to my hometown girl and patron saint Guadalupe - the reigning Queen of both New and Old Mexico on her feast day today. In Santa Fe I lived in the Barrio de Guadalupe and was graced with many a milagro from Nuestra Senora. My life continues to be blessed by her bountiful compassion. 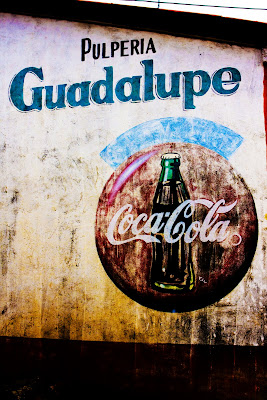 Village wall advertisement - Nicaragua
It's also 13 Moons today - the rare thirteenth full moon of the year and a winter solstice blue moon to beat! It's definitely a special day -- especially for a beloved Aztec goddess appropriated by the Catholic Church in the first half of the sixteenth century. Her beatification has undoubtedly made her one of the most famous women in the world. Supplicants in Mexico City walk for days on their knees this week every year as they pilgrim to any number of chapels dedicated to Guadalupe. The cult of Guadalupe is vast and the Basilica of Our Lady of Guadalupe in Mexico City is the second most visited Roman Catholic shrine in the world. 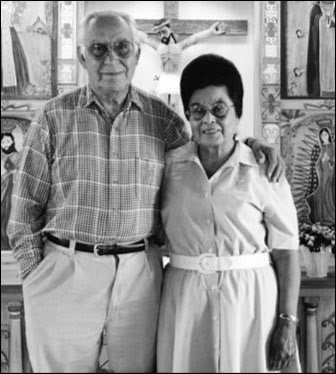 1999 photo of Santa Fe Living Treasures
Eulogio and Zoraida Ortega by Steven Northrup
The benefactors of her miracles are ever present. Last week I had the honor of meeting living legends Eulogio and Zoraida Ortega the famous Santeros of Northern New Mexico. Eulogio is well-known and respected for his exquisitely carved saints and Zoraida for the incredible detail of paint applied to them in the traditional Colonial Spanish style - artistic traditions that have endured in these valleys since the late 1500's.

Many years ago Zoraida fell ill with terminal cancer. Eulogio turned to the patron saint of the village and prayed every single day to Guadalupe to spare his wife with the promise in return to build a private chapel dedicated to her patronage. Zoraida is in her late 80's now and people have been making pilgrimages to the Ortega's chapel dedicated to Guadalupe for many years. 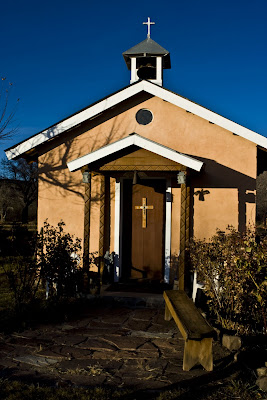 Private chapel of Eulogio and Zoraida Ortega, Velarde, NM
dedicated to Our Lady of Guadalupe

Perhaps the biggest miracle bestowed by Our Lady of Guadalupe to this incredible couple is the occasion of their 65th wedding anniversary this year. 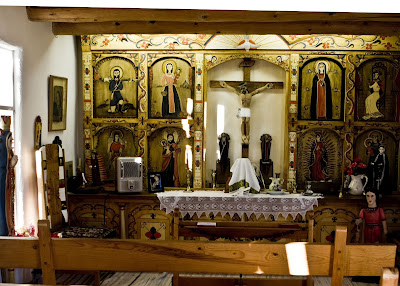 Much of the decoration inside the chapel has been hand-carved by Eulogio and then painted by Zoraida. At 91, Eulogio's youthful looks belie his age by about 20 years. He has recently lost his vision and is no longer able to carve. Zoraida no longer paints, as well, but still weaves beautiful rugs from an enormous hand loom in the main house as she has done for decades and as her family has done for centuries. 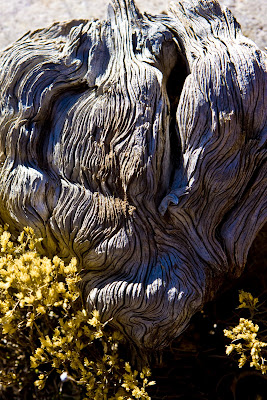 This El Corazon del Guadalupe in natural wood was discovered in the Ojo Sarco valley several years ago by Daniel Montoya. Many devoted followers of Guadalupe have come from far and wide to Ojo Sarco to pay homage to this sacred heart.

Today, on the feast day of Our Lady of Guadalupe, I celebrate the Great Mother, that lady from Tepeyac, Goddess of Creativity and Compassion, whose miracles flourish around the world. And I celebrate Eulogio and Zoraida Ortega whose enduring 65 year partnership of creativity and compassion are a testament to the divine legend of Guadalupe. In Guad we trust.
Posted by TR Ryan

Beautiful, just beautiful. What a lovely story of these two people of faith. I know this Saint well also from my years of living in San Antonio, being Catholic, & having a Hispanic fiance at the time. I have over the years had a shrine to her in my yard in different cities. Thank you for helping me to remember & to reflect.

Beautiful reminder of a beloved mother.

You made me remember my elementary school days in a Catholic School and how we honored her.

Ah, I love Guadalupe. Some time I'll have to tell you about my encounter with her. Or did I do that already?

Don't know if you knew this, but the recent full moon was also the closest & brightest of the year. :)

Gratitude--something that is in all too short supply. It's inspiring to see a couple so willing to be thankful for all they've been granted. Lovely post.

Lovely art and lovelier story. Our Lady of Guadalupe always reminds me of traveling in Latin America by bus. The driver often has a small shrine to the Virgin Mary (typically Guadalupe), Che Guevara, or, incongruously enough, both of them.

I had the chance to visit the Basílica de Guadalupe, in Mexico DF many years ago.
It was an experience I'll never forget.
I made a promisse there, and Nuestra Señora granted me a miracle of life for someone very close to my heart.
I'll be forever grateful.
Thank you for this post!

What an amazing story. The idea of feast days to saints is foreign to me, but I have read about these types of things in numerous books. Hooray for the that artistic couple and their long life and marriage!