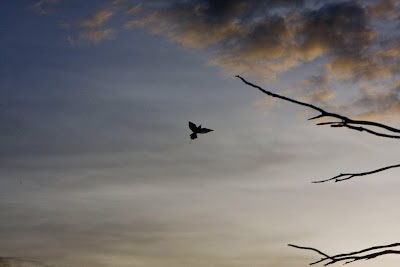 I must confess that to some degree I have, over time, become a slightly jaded traveler. Even as I write I am sitting in my Phnom Penh hotel room, having just arrived from a seven hour boat ride down the Mekong River, hard pressed to muster the energy to schlep to yet another temple or colorful street market, savor another bite of Khmer cuisine, or attempt to photograph one more sweet brown face. All of that will have to wait until later; too much sensory overload and I cuddle up with Facebook to see what the folks back home are doing. Julie in Ohio has got a red wing at the feeder, packing for Honduras and can't find the right word to describe the harpy eagle she saw in Guyana; Debby back in Oklahoma has had a home visit by a blogging teddy bear and was interviewed for a magazine but none of that stopped her from finishing the prairie chicken painting for the bird festival. I just found my old friend Doug - we lost touch for fifteen years and today he shows up on FB - we survived living in Akron together and I had to come to Cambodia to find him in Minneapolis. Mary in North Carolina quit smoking and it seems to be sticking but she wants to eat instead of blog. So in her honor I order the juiciest cheeseburger with bacon and and a big, fat fried egg on top with extra ketchup for the fries. Here's to you Mary!

Where was I? Oh yes -confessing to be an occasionally jaded traveler. I only mention that because these days when I fall for a place - it means something. I've just about seen it all, done it all and been there and back. But last week I fell hard for Port Douglas in northern Queensland, Australia. This is an amazing, one-of-a-kind place. 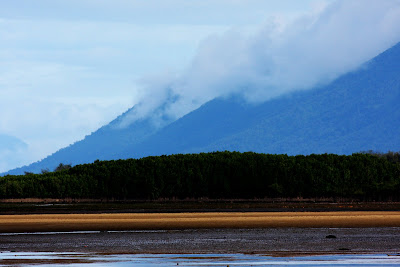 Port Douglas, population 4000, is the gateway to both the Great Barrier Reef and the Daintree Rainforest and home to Cape Tribulation. The sweet little town itself is a delightful cross of 1960's Key West with 1970's Lahaina. A place where breathtaking, unspoiled rainforest spills right onto miles of even more breathtaking, unspoiled beaches. The hour drive from the airport was like cruising through a wild animal park - wallabies, crocodiles, bustards, fruit bats, imperials doves, turkeys and cassowary crossing signs. I have never in all my travels seen a community whose ecological footprint was so small. Swallows make their nests in the hotel lobby chandelier and nobody blinks an eye, except to avoid the bird poop as it drips on the furniture. Without exception, this is a role mode tourist destination for the rest of the world to follow. Less is truly more. You get the real sense that Port Douglasonians know how to live in harmony with their surroundings. I am impressed indeed. And what beautiful surroundings they are! 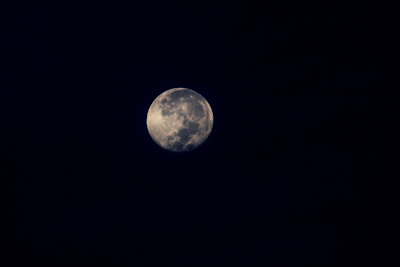 With nighttime skies so clear you could reach out pluck the moon. 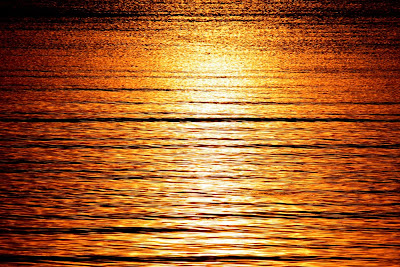 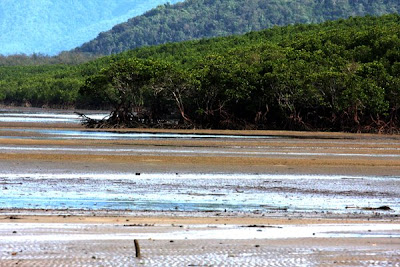 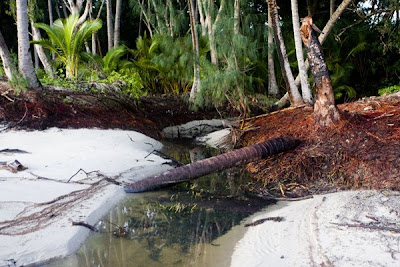 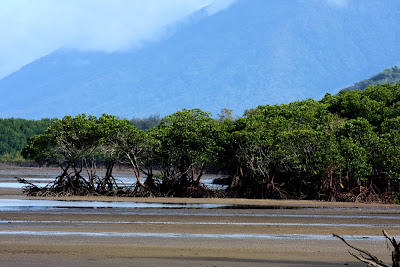 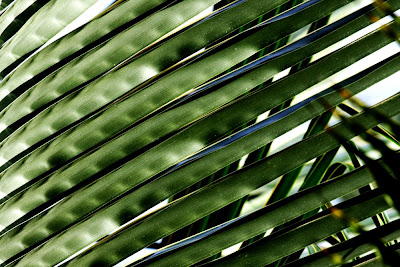 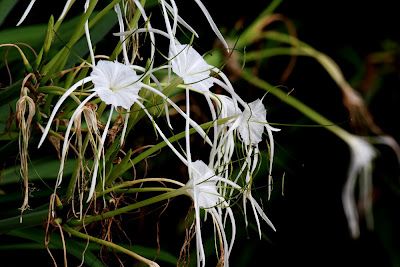 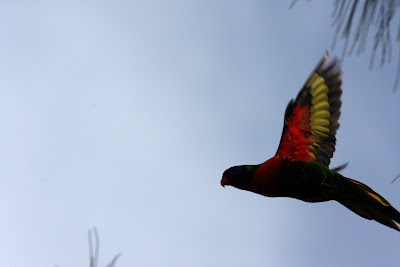 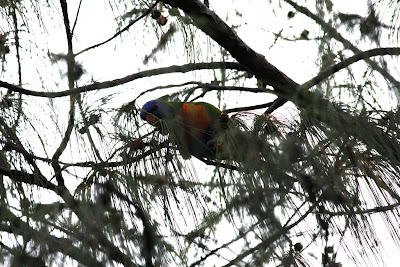 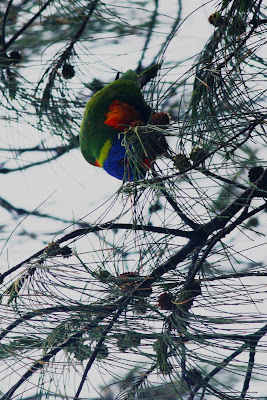 right on the beach in front of my hotel. 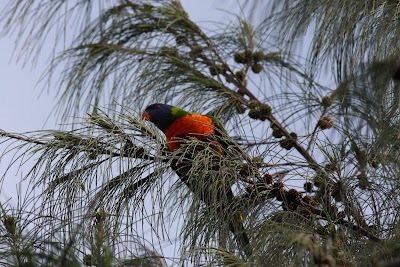 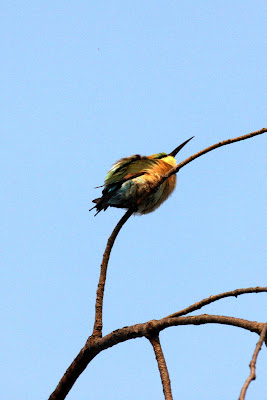 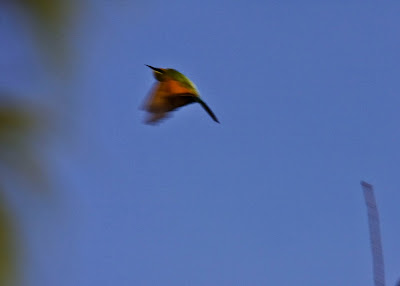 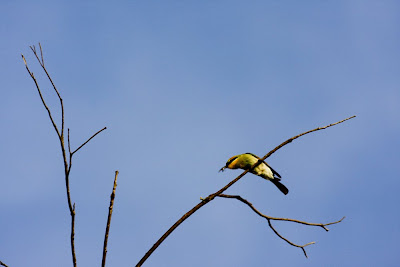 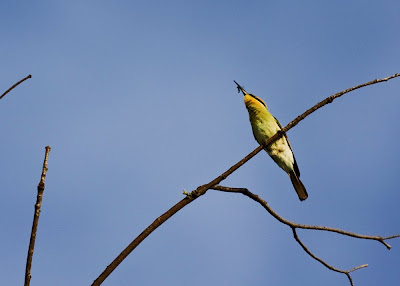 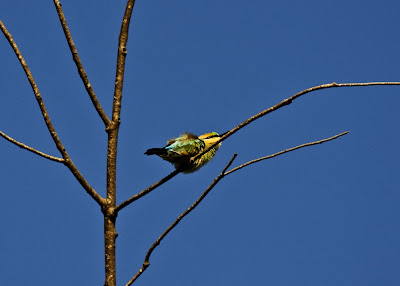 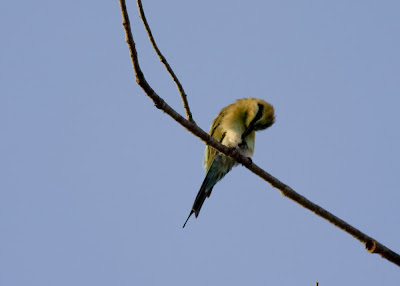 All this praise but I should forewarn you that Port Douglas is not necessarily for the faint of heart. It's also home to man-eating crocodiles, lethal-stinging box jelly fish, disemboweling cassowaries, and most recently known as the place where crikey-loving Steve Irwin finally met his match at the end of a stingray tail. Perhaps it's why I love this place - a sort of mutual respect for the wildness of place seems to be the rule of order in this pristine community. The perfect place to become completely enamored with travel again.
Posted by TR Ryan

Like your minimalist approach to photography. Very poetic. A lot of words not necessary here.

You've captures Port Douglas and the surrounding area so well! Last summer I visited the area for a month, and it was the most amazing month of my life. Did you try the night walk in the Daintree Rainforest? It was phenomenal - a tourist attraction maybe, but the wildlife I saw captured my sense of the world. The stone-still leaf-tailed gecko was perhaps my favourite creature.
It's such a diverse area. I stayed in the White House next to four mile beach, but visited the Mangrove forests, rainforest, Cape Tribulation, and the Great Barrier Reef while there.
Truly amazing place!

Your photos are perfect. I love the unmanicured beach.

I know you did not find that cheeseburger and fries in Phnom Penh. Did you?

I'm glad you got re-enegized by the recent trip. I can see how travel would get tiring if it's most of what you do. Thanks for the lovely photos, as usual. The area sounds wonderful.

Such a way with words and photos. They are woven together so smoothly that we feel every fiber of your observations. Next best thing to being there.

I know people probably shake their heads when you write that you're jaded, but I understand. Even the exotic, unfamiliar can become too familiar over time. Come home soon. Oklahoma is still waiting here for you. :) ~~Dee

Hi again! Thankyou so much for your comment; I'm so excited to talk to somebody who's been to the Peruvian Amazon... I'm entering through Puerto Maldonado, and staying in a reserve which is 2 hours along the river from the city.

Where abouts were you? I have far too many questions, you'll regret asking if I have any!
What kind of wildlife did you see? Did you do any hiking in the rainforest? Did you meet any of the native people? Most of all, did you have a good time?

I've just been looking through you're blog again (it's quite fascinating!) and seen the places you're due to travel to over the next few months - what an amazing life you lead!

LOVE this post, Tim. As well as the usual assortment of excellent photos, there's an excitement in your voice that's intriguing, too. Glad to hear you are having a good time...but don't let those pretty birds distract you from the predators on the ground!

Lovely post and photos. Did you see any Cairns birdwings or Ulysses swallowtails? Neither one is to be forgotten.

Beautiful as always. I can't decide which of this set is my favorite.

Maybe it's that danger factor that causes them to take better care of their surroundings.
I wonder some times, if we've forgotten our place in the world, the hierarchy of life. Being (or thinking one is) at the top, can create a sense that we may do as we like--what is, is there for our needs and may be used at will.
Until we see ourselves as someone else's dinner--the thought process comes full circle.

Each post of yours is a full journey to something new.

Absolutely beautiful & breathtaking!! Thanks for sharing the Journey!! Through your photos I am able to travel the World.

Love, love, love this post. Should I ever become footloose I will ask you first where I should settle down. With all you've seen and done and lived, Tornado Alley should be mighty darn proud to claim TR as its own.

I especially liked the wording of your line about Steve Irwin.

Your rainbows are well-deserved.

Those bee-eaters are AWESOME!!
T.R. you are in contact with such beauty!