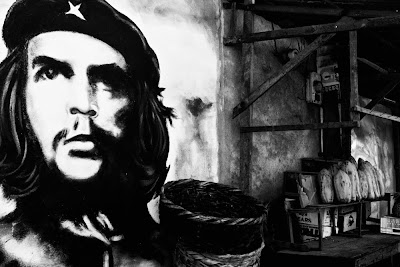 Mural of Che Guevara photographed in Esteli, Nicaragua on the eve of elections - November 2008 ©trryan
"This is a glimpse of two lives that ran parallel for a time, with similar hopes and convergent dreams. In nine months of a man's life he can think of a lot of things, from the loftiest meditations on philosophy to the most desperate longing for a bowl of soup. And if, at the same time, he's somewhat of an adventurer, he might live through episodes of interest to other people and his haphazard accounts might read something like these notes: Man the measure of all things, speaks here through my mouth and narrates in my own language that which my eyes have seen" Ernesto "Che" Guevara from "The Motorcycle Diaries"
Top Travel and Adventure Books
The Motorcycle Diaries- The story of Ernesto “Che” Guevara’s eight-month motorcycle journey across South America as a 23-year-old medical student in 1951-52. The book (recently turned into a movie) mixes observation, adventure and politics. Guevara left home with a doctor friend of his and this eight month motorcycle trip was the start of his path towards revolutionary. He explores Inca ruins, visits a leper colony, and helps miners and farm workers. His time with the underclass fomented his desire for political changes and solidified his politics and portents what the future held for him.
Posted by TR Ryan

I have a good friend who was born and raised in Esteli. Her mother is a coffee farmer that still runs a farm there in her 70s. I look forward to pointing her to your blog.

Sounds like a book I might want to read, though I wouldn't have thought that from the title. Thanks for the insight!

Thank you for sharing this great fountain with us.I loved it. Thank you for having the courage to be real......
Samantha
Best Affordable Security Systems Suitable for Renters and Apartments, Business and RV