Old Bikes for an Old Friend 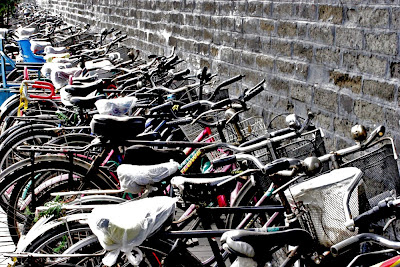 Saundra Rinearson and I first met in beginning drama class in 10th grade under the brooding glare of Ms. Woody and we both watched in appalling disbelief as any future dreams of academy award glory quickly evaporated into thin air under her menacing presence; acceptance speeches were hurriedly abandoned and more latent talents were left to be discovered and pursued later in life. 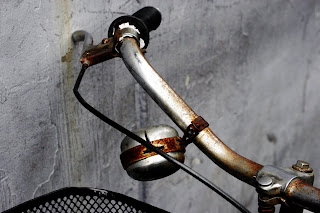 Months later we met again as co-workers at Bevo's Restaurant on N.W. 23rd Street -- this time under the watchful gaze of a lecherous boss and a 30 foot fiberglass black angus cow holding court in the parking lot. Saundra was the tall, pretty girl with the front counter position taking orders from customers phoning from their dining booths (remember that restaurant fad?) -- I was the little wisp of nothing standing on plastic crates in the sweat shop-like back room charged with the task of battering onion rings and frozen slabs of chicken fried steak for hours on end.

A few months later I upgraded my position in life to chief milkshake maker and ice cream dipper at Braums' Ice Cream & Dairy Store #1 and by then Saundra was more befittingly employed as a glamorous retail clerk in a local department store surrounded by pretty things and pretty people. Few roads pass between the worlds of ice cream and fashion and ours did not cross again for some time. 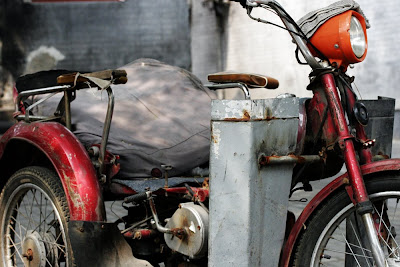 Twelve years later I showed up at our ten-year class reunion fresh off the plane from Paris with a polka-dot tie that matched her polka-dot dress to uncanny perfection and our fate as friends for life was sealed that very night on the dance floor of the Quail Creek Country Club. Twenty years later and often continents apart we have sustained both a friendship and a mutual wanderlust for distant places. 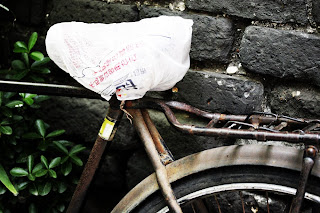 One of the delights in living back home is getting to see Saundra (now Saundra Godwin) on a more regular basis. For years Saundra has worked for the award-winning independent weekly newspaper, Oklahoma Gazette - and she brings the savvy insider's perspective, not to mention the free concert tickets, to my new Oklahoma life. Contrary to former classmate Garth Brooks' catchy tune - seems like I've finally got friends in high places!

As Saundra is much, much older than I am (two days to be exact) - I mean "old friend" in all the possible ways. Her birthday is August 8th - and this year, according to Chinese custom -- it is also the official very fortuitous, auspicious, day of once-in-a-lifetime good luck - 8/8/08 and thus the night selected for the 2008 Olympic Games Opening Ceremony. Saundra had very much hoped to be here in Beijing on her birthday and I had very much hoped not to be in Beijing for mine. The world works in unexplainable ways and I am here and she is there and neither the 'tween shall meet nor have regrets (by now its obvious that I am loving it here). 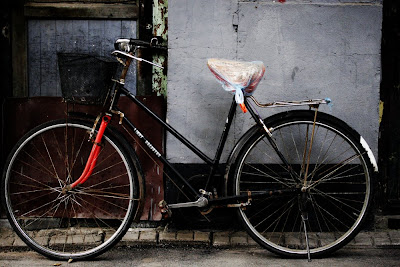 One of Saundra's, and her husband Steve's, favorite memories from a vacation here in China a few years ago is all the old bikes: a city once full of people riding them but less so now as this country modernizes at rapid speed.

And so here you are dear old friend - the picture you've been asking for of proof that the bike culture is alive and well in Beijing. Yes it is. Declining - very much so - but lets not lament that loss as it is proof that this country is now better able to feed its people and provide public transportation for its masses; there is an efficient and immaculate subway system in place now and an extensive network of bus routes with fares less than a penny and a half. 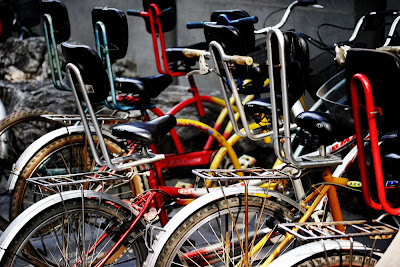 Instead, I say we celebrate the old ways and the people that cherish them and keep them alive and ride their bikes in the rain even though they no longer have to. And while we're at it -- let's celebrate friendships that have survived the likes of Ms. Woody, and bad Bevo's bosses, and first jobs, and polka dots. 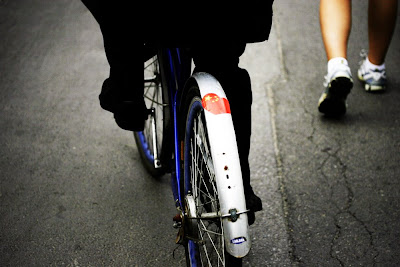 This was a very sweet post. Thanks for today's smile.

What a nice post! You and Saundra are lucky, even if you should be in opposite places.

Yukon? I drive by there all the time from where I live now to where I used to live.

Awww, Tim. You always make me smile and make ma heart swell. You write so beautifully to such a good old friend. Both of you are fortunate to have caring and sensitive souls enough to sustain a real friendship after all these years.

Enjoy the rest of your visit in a country I think you are becoming to love like home (almost).

What a great post, combining a look inside the culture of Beijing while offering such a heartwarming tribute to a dear old friend (but not that old).

As always, wonderful photos, too. You and The Faraway Nearby are one of my favorite discoveries of this summer, TR.

Hello my friend! Love how you honored my bike request. Steven has also had his curiosity settled as he joked all the old bikes would be replaced with shiny new ones by 2008. The high school and post hs memories are grand too. Yes, You, Lorene and I have had a unique winding road of friendship since High School, being so far apart most of the time! Be safe and if it's still raining Steven said to remind you to look for the people with bike ponchos...you will know when you see them. We bought two and brought back. Should be a colorful pic. Thanks Tim! Here's to a Happy Birthday, Month.
Saundra (Rinearson) Godwin

What a beautiful tribute to your friend.

Twelve years later I showed up at our ten-year class reunion fresh off the plane from Paris with a polka-dot tie that matched her polka-dot dress to uncanny perfection and our fate as friends for life was sealed that very night on the dance floor of the Quail Creek Country Club.

I love that image! Life can be such fun. I think it's the regular surprises that keep me going, especially in these desperate times.

Oh, and my teenage years will forever be marked by two years of this: "Braum's on Highland, may I help you?" The best times at Braum's were spent with friends sitting on the floor behind the counter with the lights out, hoping everyone would think the store was closed ;-)

t.r., What a wonderful post about friendship! I so enjoyed reading this! As you can tell, I am playing catch up after Edition #82 of I and the Bird. It was a lot of fun and a lot of work. Thanks for stopping by! May your friendship with Saundra live on, polka dots and all!