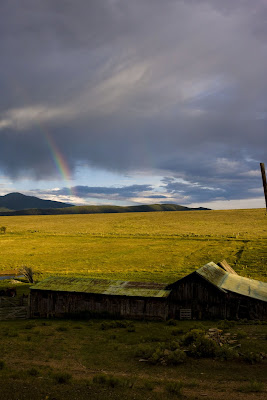 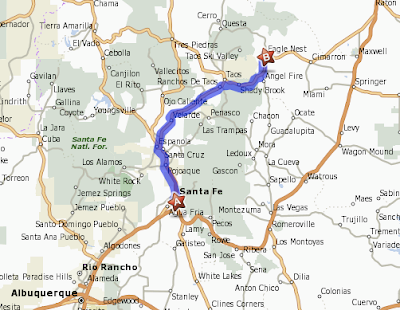 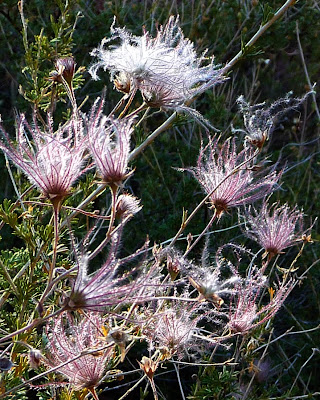 Apache Plume (Fallugia paradoxa)
A well-planned road trip should always include travel on roads that have flowers blooming, even in the fall. Northern New Mexico is the perfect place - Apache plume with its divinely diaphanous pink blooms, sunflowers, purple aster and the impossibly yellow chamisa and snakeweed provide miles and miles of brilliant color along the roadways. 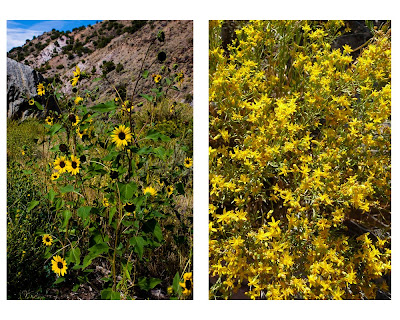 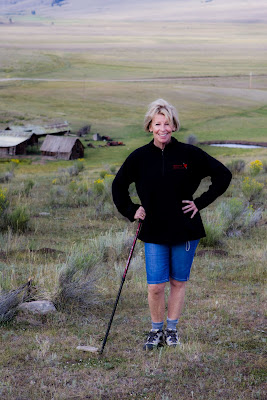 Roxi Beegles of Denver, Colorado used "the pose" she learned as the first-runner up in last year's short-lived "How to Look Like a Celebrity" makeover reality show.
The second leg of my journey was a side trip up to Eagle Nest, NM to take advantage of an empty labor day weekend cabin on the backside of the Sangre de Cristo mountains. Many thanks to my friends David and Alvaro for the use of Camp David prior to an eight-day event in Santa Fe that followed. Friend, co-worker and fellow August 10 Leo, Roxi Beegles, joined me for the weekend on her way down from Denver to Santa Fe. 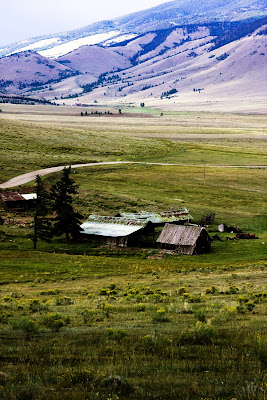 Eagle Nest is on the infamous "Enchanted Circle" route from Taos to Eagle Nest to Cimarron to Red River to Questa and back. 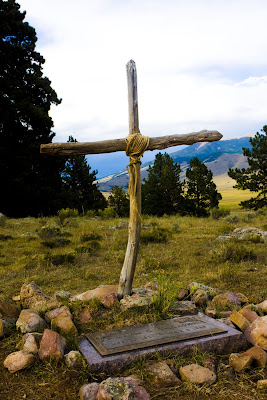 Every visit to the cabin includes a hike up to Gallagher meadows to pay respects to a long-deceased member of the clan who rests in a plot with a very fetching view. 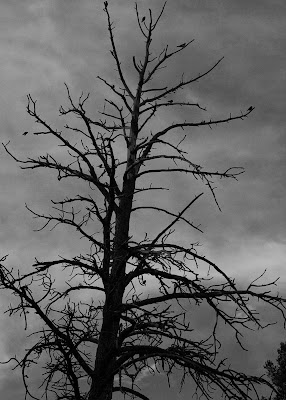 Holding sentinel over the plot is no ordinary pine-bark beetle infested ponderosa pine. Look closely - it appears to double as a Western Kingbird tree - perhaps a migratory launching pad? The nights here at 9000 feet were already down to the low 40's and high 30's - probably time for those WEKI's to head back to southern Mexico and Central America. Oh, how I would love to join them in about two months. 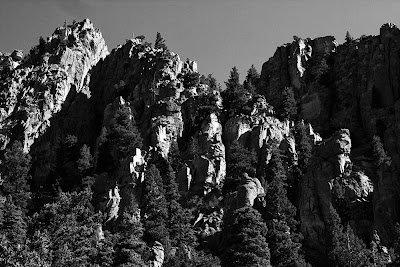 Cimarron Canyon looms large a few miles northeast of Eagle Nest. The mighty red-colored Cimarron river that flows across the Oklahoma prairies begins here as a trickle in hills above Eagle Nest. 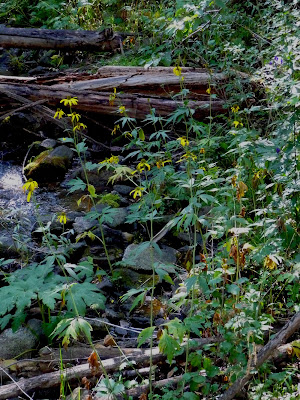 The Carson National Forest is a cool, shady rainforestesque refuge to the otherwise high desert landscape of sage, juniper and pinon. 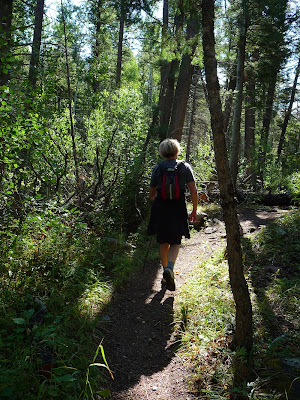 A fourth generation Coloradan descended from Colorado pioneers - Roxi is no stranger to the mountain trail and proves to be a keen hiker. 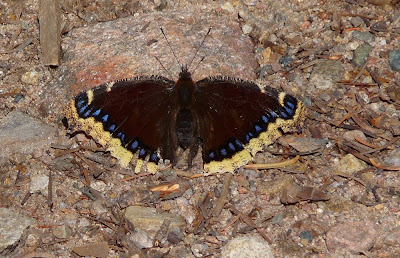 This beautiful butterfly on the forest trail will go unnamed for the moment - for fear I've used up all my ID credits with Doug Taron - perhaps he'll chime in with an answer later. 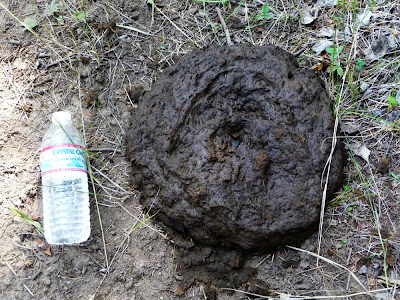 A hazard of the trail almost anywhere in NM, this cow-pie juxtaposed against an eight-inch water bottle gives the word ginormous some actual legitimacy. That sucker is at least 12 x 12. 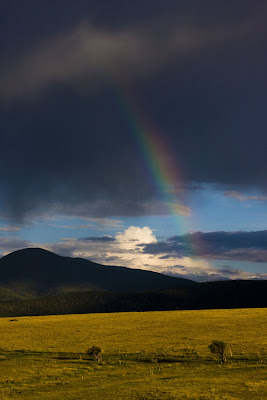 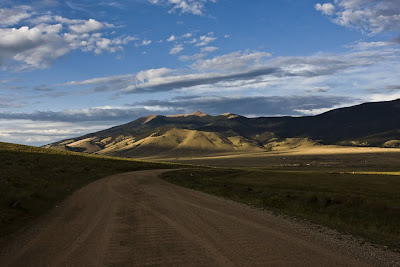 Sunday morning we said goodbye and left the Enchanted Circle by way of the Rio Grande Valley back to Santa Fe. 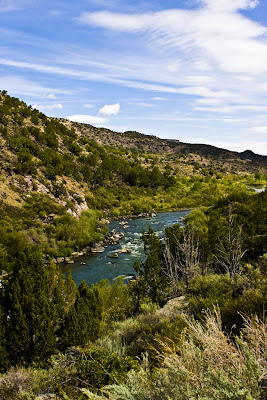 Here is your classic northern New Mexico Rio Grand Valley shot. I have driven back and forth through this narrow canyon no less than a hundred times and every single time it takes my breath away. 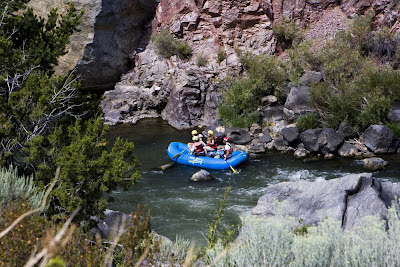 Late summer monsoons give the outdoor adventure junkies a last chance to shoot the rapids before summer's early end up here. 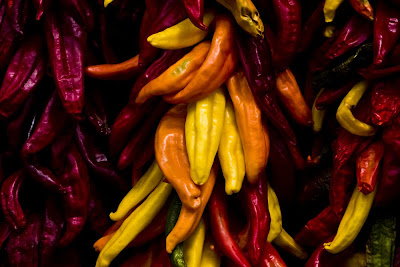 Nothing says "Fall" here like freshly-strung chile ristras for sale on the side of the road. 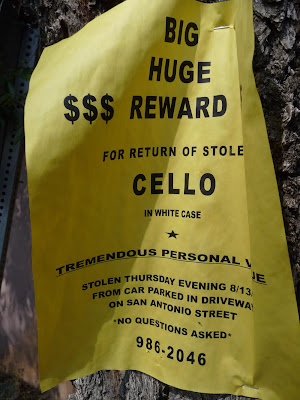 Back in Santa Fe where - "Only in Santa Fe" would someone leave a $30,000 dollar cello in their car to be purloined. And only in Santa Fe would said cello fetch a whopping $40 dollars at the flea market. Fortunately lucky cello buyer saw this sign and put the pieces together to make a happy ending for the old cello owner - recently out of an instrument and a car window.
Posted by TR Ryan

It certainly is an enchanting place. Love the "cabin" and who doesn't love a rainbow.

It looks like you're having a great time. Your photos are wonderful.

Worth enduring questionable motels, eh? Looks like a wonderful trip, and your photos are delightful, making wish I was there.

Beautiful!! As always, thanks for letting me tag along through your pictures. Truly enchanted.

I am getting so much vicarious pleasure out of your account of your trip. Please keep having fun and sharing your wonderful photos. Your butterfly is a Mourning Cloak Nymphalis antiopa.

Juxtaposing Cow-pies? Sounds like it could be a really bad band name... Hilarious!

Wow TR, for me this would be a trip of a life time. What wonders you are experiencing! It would inspire me to poetry and art! Your photos alone move my soul with longing. What a wonderful world we live in, ginormous cowpies notwithstanding!

Hi TR
This is a restrained and almost stark vision, compared to some of your luxurious and sexy posts. But really, the style fits the territory. I discovered the hundred versions of the color brown when I was in NM -- as you have illustrated so well here.

I also really like the way you bow to something so exquisitely plain. I remember your post trepidation before the frothy opening of your show.

Well, I have to walk 1/2 mile for Internet service these days. This is my monthly visit. GREAT work!


I actually have to walk 1/2 mile to get to an Internet cafe these days.

I'm enjoying your heart-tugging journey to my family stomping grounds; love the flowers and rugged scenery through your lens.

Were you the cello-buyer who reunited it with the owner? What is it with cello players? You know the story about Yo-Yo Ma leaving his in a NY taxicab?

Thanks for keeping us posted on your travels through your beautiful stories and photos! - it's an ever-more-wondrous way to travel!

i never thought i'd see a cow patty on your blog. yippe-yi-yay!

Great photos, dear tim. Thanks for sharing. The rainbow is so beautiful, almost like a fairytale, along with the Oklahoma sky. I could comment about all these photos - the road and NM sky; the peppers. I love that first photo looking down on that earthy ranch. You really have an eye and your passion comes through. YOu're such a unique blogger. I miss you, TR!

Great pictures. It looks like you are having a great time.

I have never looked so celebrity-like....where is my red carpet.

I love the varying perspectives. Crayons describes your post as "restrained", "stark", and "exquisitely plain". (Btw, I love your own blog, Crayons.) I see it as anything but. I would more describe it as being complex, rich, and exquisitely vibrant (well, maybe not the cowpie shot...) ;) I don't see NM as "100 shades of brown" but I certainly know people who do. That's probably why I'm moving there. :)

Beautiful! I guess what people about the light in New Mexico is right. I enjoyed this series very much.