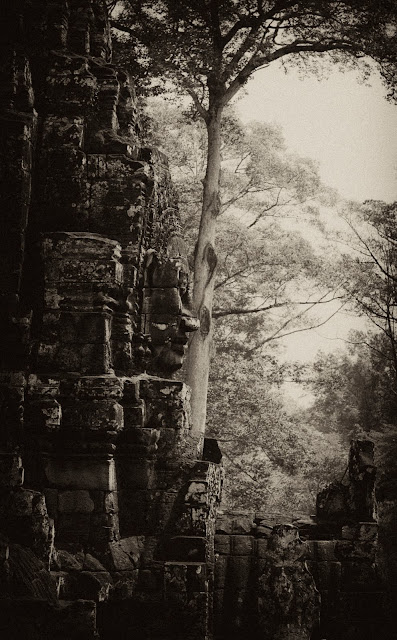 This image was inspired by the albumen print style of photography that was popular at the time this temple was "rediscovered" in Cambodia by French explorer and botanist Henri Mahout in 1860.
The albumen print, also called albumen silver print, was invented in 1850 by Louis Desire Blanquart-Evrad, and was the first commercially exploitable method of producing a photographic print on a paper base from a negative. It used the albumen found in egg whites to bind the photographic chemicals to the paper and became the dominant form of photographic positives from 1855 to the turn of the century, with a peak in the 1860-90 period. During the mid-1800s, the carte de viste became one of the more popular uses of the albumen method.
Posted by TR Ryan

Very interesting. I had no idea that egg white was used to develop photos.