I will be a Hummingbird


It's the little things citizens do.  That's what will make the difference. My little thing is planting trees.
- Wangari Maathai
The conservation movement is mourning the loss today of one of its heroes - Nobel prize winner Wangari Maathai died of cancer yesterday in a Nairobi hospital.  Best known for creating the Green Belt Movement which planted more than ten million trees around Kenya, Maathai's work centered on improving the lives of women and making the connection that when the land is sustainable so are the people.  She was the first African woman to win the prize.
In October 2008 Maathai spoke to a sold-out crowd at Oklahoma City University as part of the university's Distinguished Speakers Series.
She changed my life.  She showed me what a powerful woman's voice not only sounded like, but felt like.  And she taught me as we traveled through villages what interdependency is all about - environmental issues are issues of social justice.
-Terry Tempest Williams 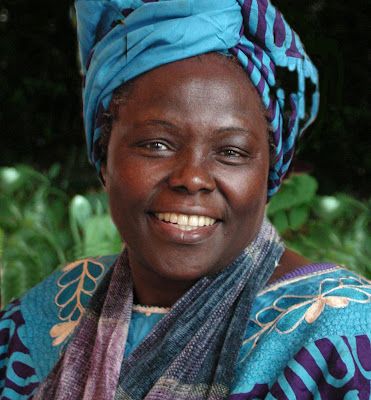 I was so sad to hear about Wangari Maathai. Thank you for such a wonderful tribute!

Amazing woman, amazing video. If we all did the best we could, what a world this would be!