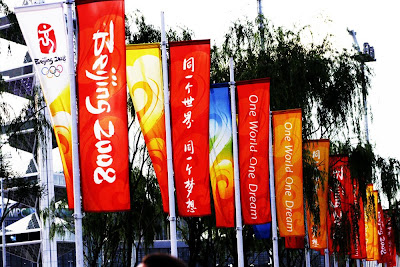 Tonight, I am back in Olympic Park for session ATO4: in Olympic speak that's the fourth presentation of Athletics at these games -- always on the second day of the athletic discipline which comes halfway through the games.

To a lover of Olympic running events - AT04, at most Olympic Games, means "the race" to determine the fastest person in the world. I love running and over the years AT04 is a ticket to covet. I had to sell my soul to get the night off - but it was well worth it. 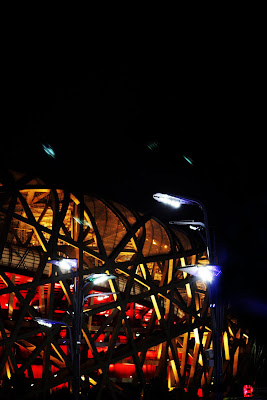 And tonight - that race would take place at the Beijing National Stadium - the 500 million dollar architectural wonder that has been colloquially dubbed "the Bird's Nest". 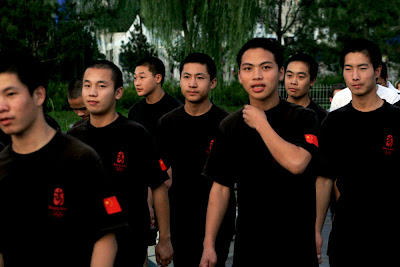 People came from far and wide - all on a mission to see the world's fastest man. 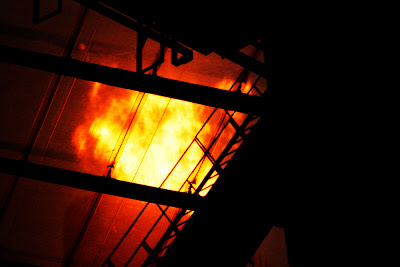 The Olympic torch glowed through the roof of this architectural curiosity. 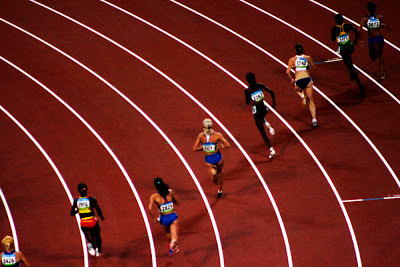 Ahh, runners -- is there anything more beautiful than the way the human body moves at full speed? 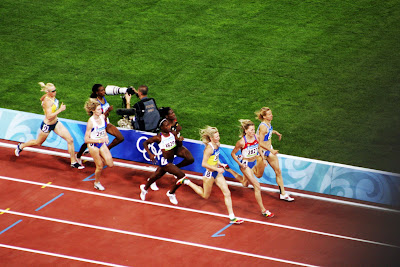 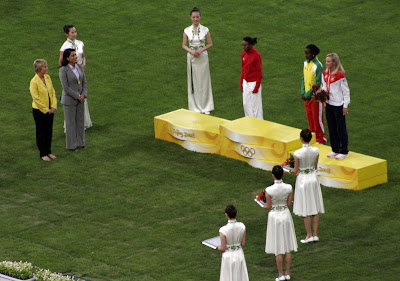 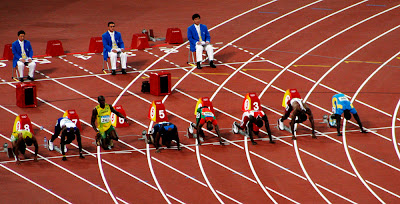 And then it was time for THE race. The Mens 100m final that often determines the fastest person in the world. The tension was palpable. 80,000 people in the stadium holding their breath. While most of the line-up is focused and concentrating, Usain Bolt, third from the left, launches his trademark imaginary "bolt" of lightning into the air.

And there he is, the man who would be king - Jamaica's Usain "lightning" Bolt. Moment's later Bolt would smash his own World Record to become, yet again, the fastest man in the world at 9.69 seconds. 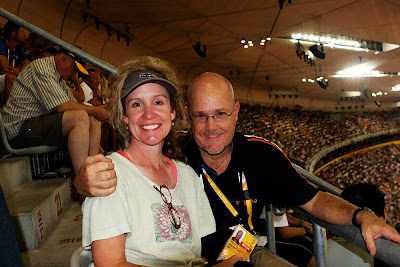 I am 5000 miles away from home, sitting in a stadium of 80,000 people from every corner of the world who have come to witness sports history - and who do I end up with? Marie, aka Mango Betty, writer of the blog The Deep End of the Gene Pool. Marie is also a featured writer on the blogs Wanderlust and Lipstick and Not My Tribe. She's one of my favorite bloggers out there in blogland. Isn't she gorgeous! Not to mention a gifted writer, fantastic mother, keen intellect and, most importantly tonight, a fellow connoisseur of fine running. Who better to spend the evening with drinking eighty-cent Chinese beer and eating bad rice crackers in a world where "take me out to the ballpark" means fish sausages to go. 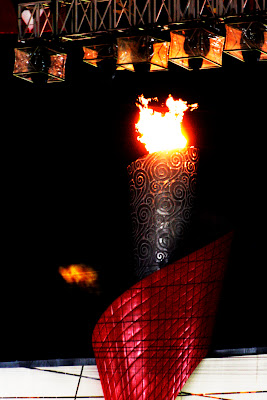 One world, one dream. The Olympic Games experience is truly magical -- its the one time the whole world puts asides its various differences and comes together to celebrate a common cause.

Thanks big time for these ongoing Olympia updates! They are way more interesting than what the general media is dishing up. Why? Probably because they are written by a "normal" human being, without some kind of an agenda.
Kudos for that! Can't wait for the next brief!
Cheers, Klaus

Your Olympic updates have been so complete and interesting. In fact, I'm inspired to quit catching up on my reader and go turn them on!

Great update report, T.R. The title of your blog is meaning more and more to me; you *do* bring the faraway nearby! Thanks!

Hi TR
I've just been catching up on your posts from Beijing. They are just beautiful, especially the shots of the people in the streets. I enjoy your enthusiasm and insight.

I'm going to show the crab- scorpion post to my 7-year-old nephew.

How ironic, running into a blog friend, as you say! Very cool, though...You gotta love it!

Your entry here leaves me speechless. To stand for the Ethiopian National Anthem is a dream, to see the world's fastest man at 9 seconds...wow. I remember 11 seconds being all the rage. If that's not enough, Tim, you meet a fabulous blogger and share Chinese beer. Perhaps you'll look back on this experience as one of the best of your life.

BTW, I saw Michael's relay and 8th medal last night (way past my bedtime) and have enjoyed all the media coverage today with mom Debbie... And, Dara Torres. What a woman.

Another wonderful post from Beijing! Glad you're having a great time, Tim!