September: McCurtain County - TR and Motmot in the Heart of Little Dixie 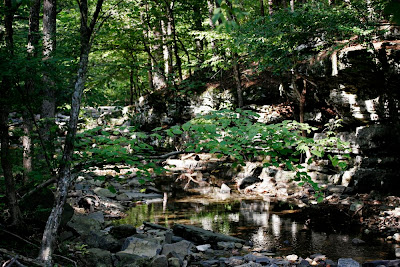 To reach McCurtain County from central Oklahoma– you must first head east and rise slowly up out of the southern great plains escarpment – navigate the soft, rolling cross-timbered, oak-studded hills of eastern Oklahoma and then head sharply south brushing the Ozark mountains until you finally reach the southeastern tip of the state. Any further west and you are in Arkansas or Louisiana – head south and you are Texas-bound. Stay put – and this mythical place of the Choctaws will shatter any preconceived notions you might have of flat, red-earthed, tall-grassed, dust-bowled, tornado-alleyed Oklahoma. 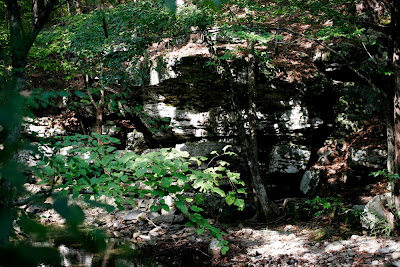 Also known as Little Dixie in these parts, McCurtain County is nestled deep in the concentric folds of the Ouachita mountain valley. It is forest deep and dark and worthy of the lavish praise Life Magazine recently gave as “one of the top places to see in your lifetime.” At first glance these forests are reminiscent of subtropical Central America; at second glance – the woodlands of New England. Thoreau would have, indeed, been quite at home here – his discoveries infinitesimal. 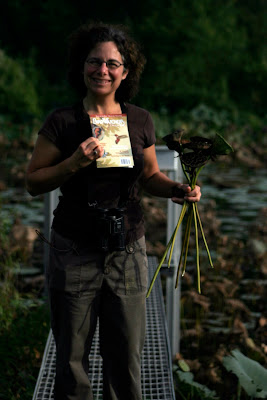 This past week fellow blogger and birder Debby Kaspari and I packed our bags and binos and made a quick trip to this legendary place. Debby is an award-winning Oklahoma bird and wildlife artist and author of the blog “Drawing the Motmot.”

I met Debby through her blog about a year ago after discovering her incredible artwork in my neighborhood art gallery. We corresponded briefly and eventually met last winter. With a love of art, nature, travel, landscape and, of course, conservation and birding as a common denominator, we became fast friends and now fellow explorers of the magnificent Oklahoma outback. And who better to go birding with than the artist who's work has been featured not once, but twice this year on the cover of Bird Watcher's Digest! 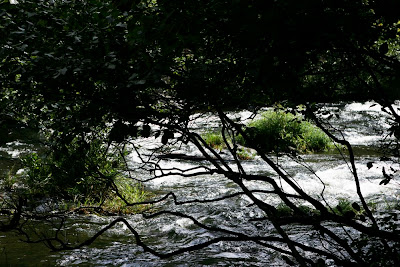 In the evocative nature tome “The Peregrine”, J.A. Baker writes “I have always longed to be a part of the outward life, to be out there on the edge of things, to let the human taint wash away in emptiness and silence.”

After two months in Beijing, I desperately needed to head to the woods to let that “taint” of urban living, indeed, wash, wash, clear away. And Debby, not long back from six months in New England as artist-in-residence in the Harvard Forest, was jonesing for a little hit of the New Englandesque woods. We put pedal to the metal and headed south, like Thoreau to the woods..."deliberately, to front only the essential facts of life, to see if we could not learn what it had to teach..." 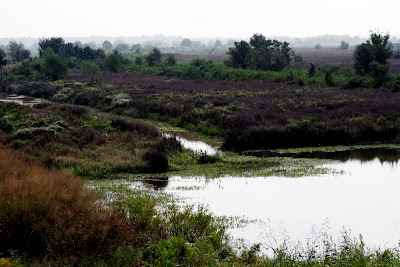 The main reason for our journey was to visit the Red Slough Wetlands Reserve project. We'd both long been tantalized by some of the rare and exotic birds seen here and reported on the Oklahoma Birds List. Red Slough, once covering more than four square miles, was the largest wetland complex found in Oklahoma. In the late 60's the area was drained, cleared and converted to agriculture use. In 1996 a private land owner turned over almost 6000 acres of his farm to the Wetlands Reserve Program to be used as wetland reclamation. In short time Red Slough has become a premier birdwatching area and, with more than 293 species sighted, is quickly becoming one of the most popular destinations for birders in the United States. 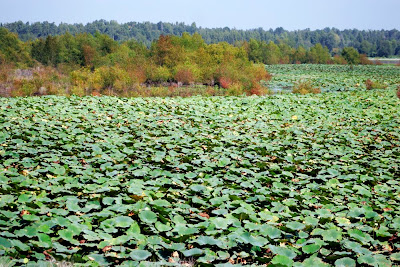 Red Slough proved to be an otherworldly, exotic delight - a sort of primeval soup of birds, reptiles, amphibians and insects - most of which are not your garden variety central Oklahoma types.

Berlin Heck, former manager of the nearby Little River Wildlife Refuge, ardent birder and one of Oklahoma's most beloved and respected wildlife managers was kind enough to give us a private tour of the refuge. There are no words to express our gratitude for the spectacular world he showed us. As we ticked off bird after bird, lifers - many, it was hard to imagine that we were not standing in some Louisiana bayou or Mississippi swamp: Purple gallinules, king rails, wood storks, anhingas, and black bellied whistling ducks were just a few of the birds we observed at Red Slough. And somewhere tucked into the 2900 acres of restored bottom land hardwood - the ghost of an ivory-billed woodpecker surely sailed on silent wings. 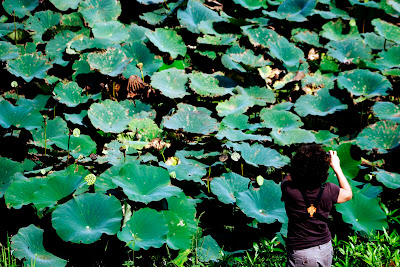 Debby was intrigued with the American lotus plants - even as they threatened to overtake her. Watch out for the gators Motmot - not too far away is a nesting mama with a bad temper. 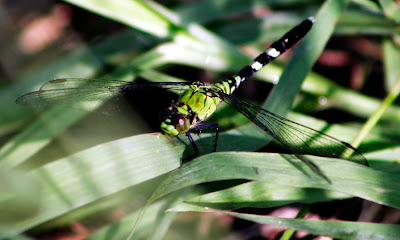 Red Slough is an odonata watchers delight. This common pondhawk (?) is just one of about seventy species of dragonflies that have been documented at the slough.

After our time with Berlin it was time to explore the gentle woods that McCurtain County is so famous for and to watch as the golden days of autumn slowly began to unravel. 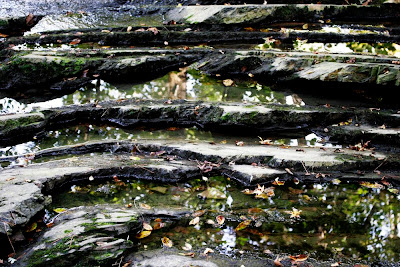 We're back in the forest. These slate and sandstone paths, carved by crystal clear mountain streams behold a perpetual state of grace that consumes and overwhelms me. The perfection of it all seemed beyond my just rewards. 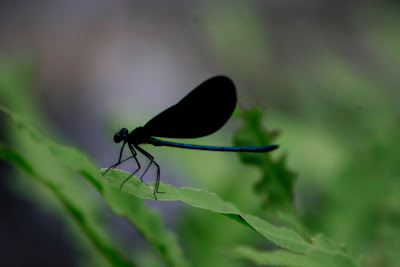 My first ebony jewelwing - this odonata watching is very catching. 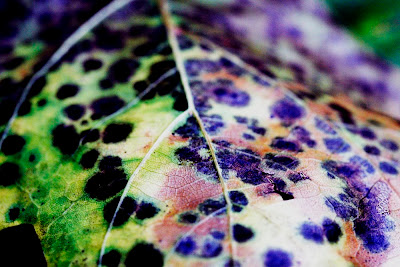 An oak leaf adorned with the subtle hints of an autumn on its way. 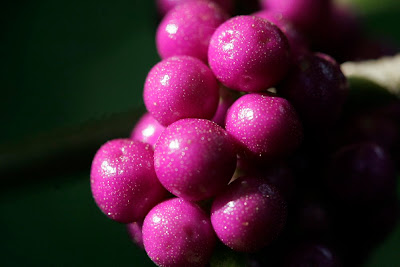 Robust American beauty berries - part of the fecundity of fall in the Ouachitas. 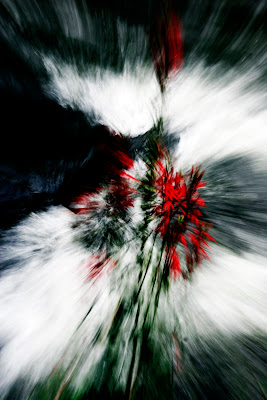 A cardinal lobelia by a stream is a scarlet promise of God. 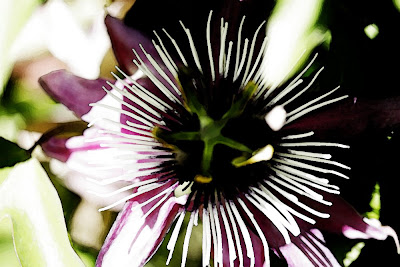 The wildflowers were abundant and too numerous to count. Pasaflora vines were everywhere and their little seed pods of passion fruit proved to be a delicious treat. 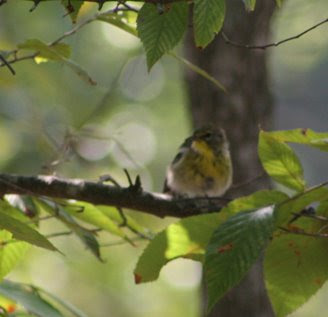 Late in the afternoon we encountered a patch of forest that was "dripping" with warblers. We followed a group of 30-40 traveling together - rather unusual behavior for warblers. Hurricane Ike was still a day away to figure a fall out. We were perplexed. 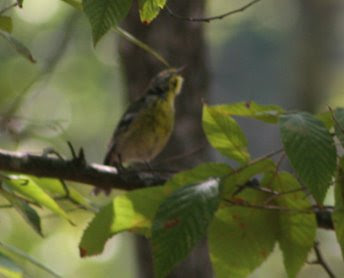 Despite the photos - we are unable to make a positive ID. Anyone have a clue? We've nearly given up. Between adolescents and late summer molt - these are hard to discern. 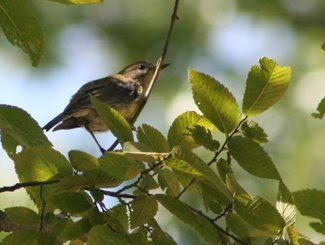 The Science Chimp is weighing the the matter and we hope to have a verdict soon. Until then any OK Birders out there have an idea? Any birders? We'd like to solve this warbler mystery soon (most certainly a life bird for me). 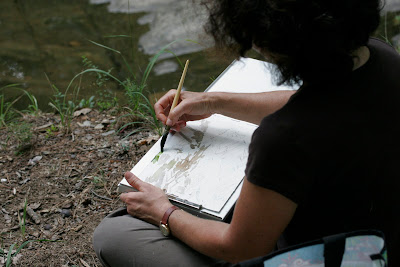 Let me introduce you to a real renaissance woman: artist, writer, blogger, gardener, teacher, birder, designer, naturalist and fierce banjo player. Debby Kaspari - drawing the motmot, and and drawing September in McCurtain County. The time spent with Debby was like attending a master class in art and natural history. Motmot, I can't thank you enough.
Posted by TR Ryan

excellent presentation of this wonderful (must be) place. well done again

Nice change of pace for you after China, huh? A wonderful place - no convincing needed. Loved the Passion Flower - so different than ours here, but equally fascinating!
Cheers, Klaus

Such a contrast from your Beijing work. Lovely, lovely. Thanks for taking me along.

Sorry, I am no help with the warblers.

What a trip! You do Eastern OK with the same verve you did Beijing. Definitely a place to go in one's lifetime. And those lotus leaves are enormous!

Hey you, today at the office I spent a lot of time soaking up your atmosphere there...and before I could comment, there was an intruder who stepped into my office and boy was I irritated.

Tim, your trip with Motmot is just what you needed after you busy business in Beijing. Your photos made me oooo and ahhh. I enlarged all of them. Beautiful and serene.

Thanks for calming me down when I needed it.

Great post, great photos. That's a nice shot of an ebony jewelwing. If it's your first, I suspect that they are less common in Oklahoma than they are further east. They don't always sit still well for a photo.

TR..Glad to see you made it to the Slough, the place is just wonderful. Congratulations on your new syndications!!!!!!!!!!

Nice post. Your Qi has obviously caught up with you!

I think your mystery warbler is a Kirtland's warbler, no? Did it have a clear (not buzzy) chip-chip-che-way-o song?

I love your site and will be giving it an award in my next post over at Silk Road Gourmet.

My OK creds are that part of my husband's family comes from that neck of the woods and are part Quapaw.

Keep up the great work, your photos and commentary are a feast for this cook's eyes!

your blog is so beautiful.

Wow. What an amazing place. I didn't realize those lotus plants were that big until I got to that picture of Debbie near them. Viewing the first shot they reminded me of a place here at Mt. Baldy but the other pics show it was definitely not even close. Thanks for sharing these!! :-)

What a talented woman! People like that make me want to put my art supplies away.
I love this area--some of those photos remind me of the Niagara peninsula & the escarpment, in particular. Kind of makes me homesick...

T.R. all I can say is wow! What a trip and what a great friend to take it with! Your writing is perfection and your photos are right behind. I never heard of this place but now you've got me wanting to travel to Oklahoma. All I know if it is the Roger's and Hammerstein musical, Fort Sill, a brief visit to the Whitchita Mountains, and one night in Okalahoma city where we visited the memorial. I have GOT to go to this place! BTW, I saw my first scissor-tailed flycatcher in OK!

A magnificent photo essay, T.R.! I enjoyed every bit of it. Thank you!!

Wow what a day you had together!

And all so pretty!
I'm glad that, with all the places you've seen, you still share the sights of home. Nothing can compare.

I enjoyed this so much. You are fortunate indeed to have such beauty so close to home. Thanks for sharing your lovely photos.

What are those pink berries????...from someone from the Blueberry region ? I've been trying to grow passion flower with no success and to see it growing wild...wow. I'd be really afraid of gators though.

Chimp sez Pine warbler, adult male, all sticky from the pine tar. The big bill, eye crescents and especially the white in the tail are all tipoffs.

Thank you, Tim, for taking us with you and Debby on this miraculous safari. Oh, would I love to see it. The shot of Deb with the lotus leaves is killer. Wonder where she thinks she's gonna plant them seeds?