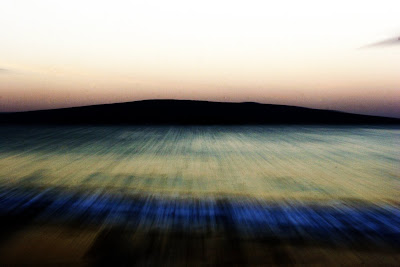 Turtle Island - Mother Earth - Gaya
We've been celebrating and protecting her for more than 10,000 years - why stop now?
Earlier this week, one of my favorite people on the planet, Jane Goodall, sent me an email. Well, probably not just me - hopefully a couple hundred thousand others - but nevertheless it was a timely reminder that this entire week is a celebration of our planet Earth. And as a fellow traveler with Jane on this fantastic, beautiful, planet - her note hit home:

"As I travel the world more than 300 days per year, I meet so many amazing people who are using their lives to make a better world. They understand that each of us makes a difference, every day, with even our smallest choices.

I'm only a 200-day-per-year kind of traveler - but nevertheless Jane's note reminded me too of some of the amazing and compelling people I've met in my travels recently who are also making a difference every day with their dedication and their brave choices on behalf of this place we call home.

On this special week designated to celebrate Planet Earth, I want to recognize some of these extraordinary people I've worked with this year and thank them for the inspiration they've given me and countless others. It has been a pleasure meeting them out there on this wonderful, wild ride of a journey:
Albania
Auron Tare 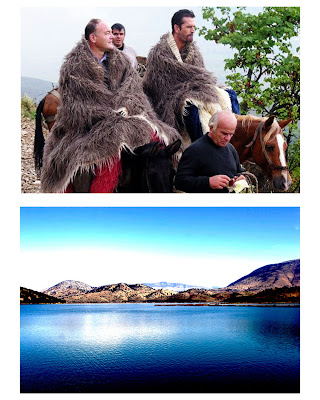 Auron Tare is not only a noted historian and journalist but also considered a pioneer of sustainable tourism in Albania -- promoting the country's cultural and environmental riches as a renewable source of economic development through tourism.

Years ago he tirelessly worked to save an historic site near his home and in the course became one of the founders of Butrint National Park - which was eventually named a UNESCO World Heritage and Ramsar significant wetlands site. In 2005 he was awarded a one million dollar grant by the World Bank to address environmental issues in the park. He also formed the first exploratory expedition in the north of Albania on behalf of the Smithsonian Institute and the Royal Geographic Society. And with Albania poised to become the Costa Rica of Europe, Auron is quite keen to introduce the wide world of birders to his country's avian riches.

Auron has turned his passion for his country and the environment into political action and if his party wins the elections for Parliament this spring - he's expected to play a key government role in supporting Albania's stunning natural resources.
Siberia
Bashila- Crown Shaman of Lake Baikal 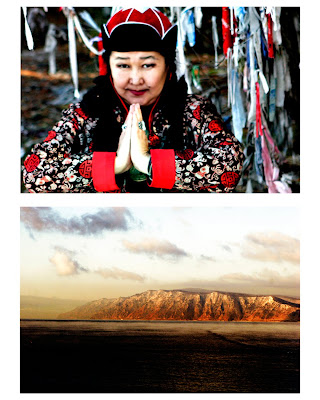 Born the eleventh child of eleven daughters in a small village in the Buryat Republic of Siberia, Bashila was identified early on by village elders as an heir-apparent shaman and was eventually chosen to carry on the centuries-old Buryat tradition of shamanism -- not always an easy role for a female in Buryatia, the northern frontier of the Mongolian world.

In time Bashila began to use her spiritual training not only for healing her fellow Buryats, but for healing the sacred waters of Lake Baikal as well. And in doing so - she restores the practice and the importance of caring and protecting the environment back to her people. She now partners with renowned Lake Baikal scientists to bring an indigenous voice to its conservation. 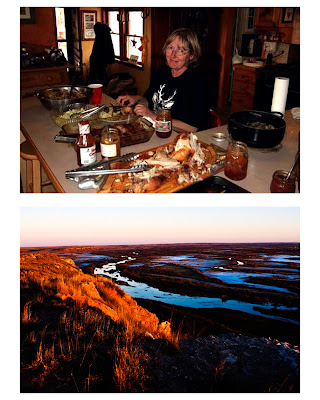 Sue Selman is a fourth generation Oklahoma rancher, former president of Save the Prairie and a tireless advocate against the destruction of intact natural prairie ecosystem by the growing presence of wind power companies. A pioneer in Oklahoma's burgeoning agritourism movement - the Selman Guest Ranch is a role model operation when it comes to using innovative ranch-based agritourism events to earn tourism dollars toward sustaining large family-owned tracts of nearly unchanged prairie and its subsequent maintenance and conservation.

Her 14,000 acre ranch was recently designated as Oklahoma's first Audubon Important Bird Area and her conservation practices have gone a long way in protecting the threatened lesser prairie chickens and snowy plovers that have existed in this habitat for centuries.

In 2005, Sue received a grant from the Kerr Center for Sustainable Agriculture to use toward a non-traditional, multi-species grazing system which used Droper/Croix sheep and goats to help control invasive plant species without resorting to chemical control methods. She is an indefatigable voice for the conservation of Oklahoma prairie and her in-depth research of wind power certainly begs a lot of questions as to the accuracy of its "green-ness".
Peru
Alan T.K. Lee 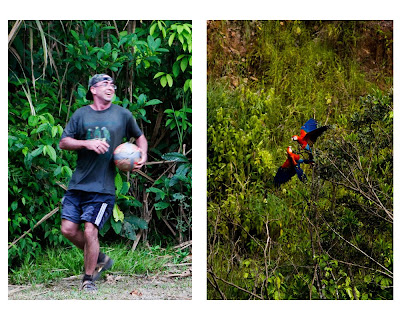 In 2002, Alan T.K. Lee walked away from a well-paying computer software career in Manchester,UK and rode his bike 6000 km across South America as an ambassador for the National Excema Society. Not ready to return to the corporate world, Alan remained in Peru and volunteered for the Tambopata Reserve Society. In time he became a resident naturalist and field worker for the Tambopata Macaw Project and began investigating the impact of tourism on the Peruvian Amazon for Project Fauna Forever.
His experience volunteering in the field at Tambopata turned him into a passionate advocate for the conservation of macaws and other parrots and he now serves as the co-principal investigator for Earthwatch Institute's "Macaws of the Peruvian Amazon" and manages the Tambopata Macaw Project.
He is also completing a related Ph.D program at Manchester Metropolitan University and is one of the world's leading experts on clay licks as they relate to parrot abundance. Alan is also keeping a watchful eye on the devastating impact of the new Interoceanic Highway that will soon connect the west coast of Peru to the east coast of Brazil.
Nicaragua
Kathy Adams 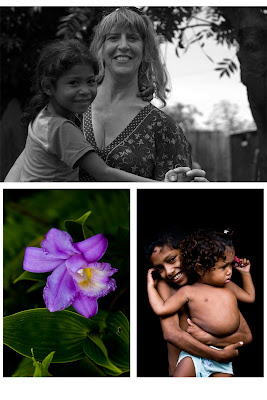 An encounter with two street kids while working in Costa Rica as an engineer right after college graduation changed Kathy Adams' life forever. She never left Latin America and since 2003 she has been the founder and director of a successful grassroots organization that addresses poverty through education in Nicaragua, the worlds second poorest country. Kathy's Empowerment International helps to break the repeating cycle of poverty by working with parents to keep their children in school and by providing children in high risk areas with the physical and emotional support needed to stay in school.
Kathy also understands the complex intersection of poverty and conservation and knows that protecting the biodiversity of Nicaragua is intrinsically linked to the human well-being of the community. To that end, her photography program, Mi Camera - Mi Mundo, which puts a camera in the hands of many of her impoverished students is nothing short of brilliant. It not only provides students with a creative and artistic outlet but, through the lens, also engenders an overwhelming connection to place and an awareness and appreciation for the natural beauty of Nicaragua.
Backyard Naturalists Across America 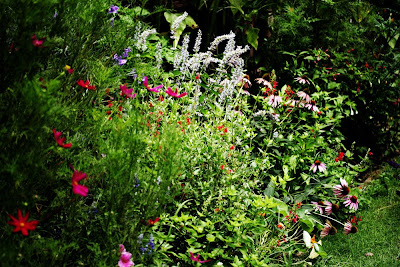 On this Earth Week we must not forget the local heroes of conservation who are doing their small part by turning suburban backyards into important wildlife habitat by replacing grass turfs with trees, flowering plants and ponds that sustain birds, butterflies, reptiles, amphibians and other suburban wildlife. For more information on turning your suburban backyard in to a wildlife paradise checkout this website.
Parents and Mentors
Eradicating Nature Deficit Disorder 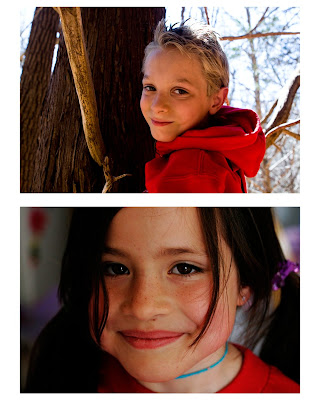 And let's also not forget the parents and mentors of children who believe no child should be left inside. The greatest legacy we can leave to the Earth and its conservation is by inspiring the children we come in contact with to explore, interact, appreciate and conserve the great outdoors.
Nature Bloggers 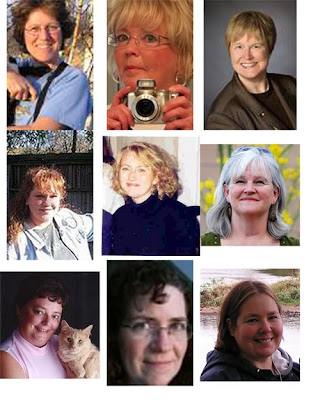 And last, but definitely not least - a shout out to the Nature Bloggers who inspires us every day with pen and camera to love, cherish and respect our little corners of the world.
From left to Right:
Julie Zickefoose , Mary's View, Wrenaissance Reflections
Susan Gets Native, Somewhere in Jersey, Sycamore Canyon
Kat Doc's World, Nature Remains, Hasty Brook.
After two years of blogging, It will be a pleasure to meet these nine incredibly talented nature bloggers next week at the New River Birding and Nature Festival.

Think globally, act locally. The expression that has been urging generations the world over to assume responsibility for individual choices. It's overworked, and under-rated...and it is the answer.
Great writing.Thank you.

This is an awesome post Tim!
Sometimes we meet extraordinary people that become an inspiration.
That Interoceanic is a nightmare :(
Have a great time with all those wonderful bloggers!!
I'll be thinking of you all :)
Take care!
Mel

Great post, thanks for the brief bio of several people including one right here in Oklahoma.

you need to add
http://bosque-santa.blogspot.com/
to your list. great nature blog

Tim, this post is pure inspiration. I'm looking forward to meeting you at New River.

T.R. - You are rich with stories and experiences. Thank you for taking the time to introduce us to so many wonderful people and the causes they lead - especially the woman from Oklahoma. How great to recognize someone in our little backyard of the world. You are an amazing man, and I believe for you, my friend, THE BEST IS YET TO BE!!! Traveling mercies always, jen

I've been far too cynical for quite a while now, when it comes to environmental issues. I used to care SO deeply that I wasn't functioning very well. As time passed, I lost faith in humanity, in general. This post helps restore some of that, & I thank you deeply for the gift that that truly is.

After going through this aurtical i have decided to bookmark this site found this really interesting & thanks a lot for keeping the blog Lively with such interesting blogs.